North West Europe 1:250,000 GSGS 2733 & 2733b:
"Compilation of the 1:250,000 map was undertaken by the War Office and was begun before the outbreak of World War I. The series includes just six sheets and centres on Belgium and neighbouring regions in France, Netherlands, and Germany. The map was prepared in five colours with contours set at 50 metre intervals. This series is more detailed than sheets of the same number and scale in series GSGS 2738."--Concise Guide to Maps of the First World War, Archives Canada (NMC)

France 1:250,000 GSGS 2738:
"Early in the war, the area covered by the original 1:250,000 map (series GSGS 2733) was extended west, east, and south in order to cover a larger portion of northern France. The newer work was undertaken by the Ordnance Survey, and in the interest of economy, followed the older French 1:200,000 topographic map, both in terms of its style, content, projection, and sheet grid lines. Although this series duplicates coverage of Belgium and northeastern France, the sheets that bear the same numbers as those in series GSGS 2733 are less detailed. As well, the sheet grid lines are slightly different."--Concise Guide to Maps of the First World War, Archives Canada (NMC)

NOTE: The maps in this series were used for planning and logistics over large areas and therefore are not at a large enough scale to show individual trenches. Some sheets of this series have been prepared by the War Office and others by the Ordnance Survey, margins may not always exactly agree.

click in any of the grid squares on the index below to view our collection of maps for that area. Squares that are grey indicate no maps are available. 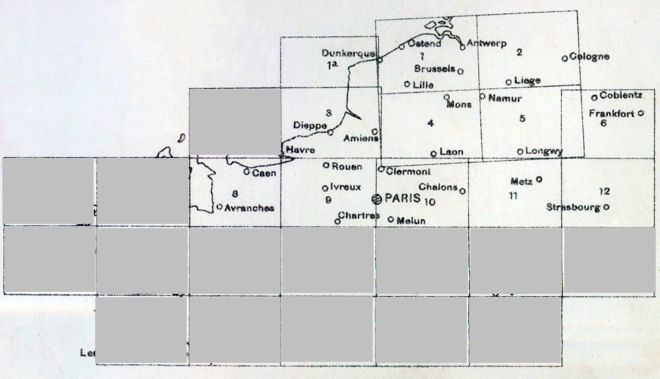