How to Read a WWI Aerial Photo Number

How to Read a WWI Aerial Photo Number

There can typically be 3 or 4 lines of numbers present on WWI air photos. These numbers usually appear in the upper, right-hand corner of the photo but placement can vary. These lines are normally in the same sequence as listed below but have also been known to vary.

indicates the series and the photo number.

An "O" was included preceding the photo number if the photo was taken at an "oblique" angle rather than the normal vertical angle. Scale remains constant over the entire photo in vertical angle shots but varies from one side of a photo to the other in oblique angle shots.

indicates the day, month, year and time of day when the picture was taken.

lists map reference numbers that correspond to the area covered by the photograph (see: How to Read a WWI Map Reference Number).

A letter and number combination (e.g. F=8 or F-8) can be found on the second line following the date information or occasionally on a separate, fourth line as in the example below. It indicates the focal length of the camera in inches and can be used to determine the scale of a photo if the altitude is known.

Note: The symbol that looks like a white cross to the left of the numbers in the closeup is actually a North arrow. 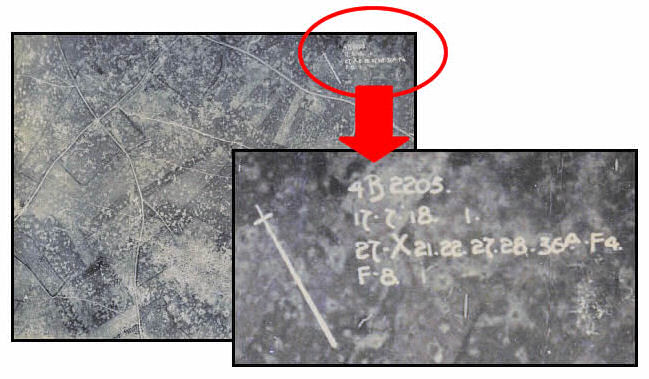 Here is an example taken from the photo above:

This line is a combination of the series number & photo number:

(focal length of camera = 8". this can be used in conjunction with the altitude, if known, to determine the scale of the photo). 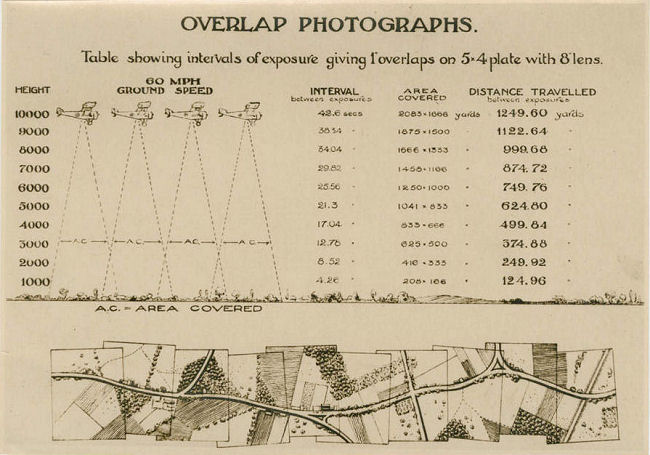